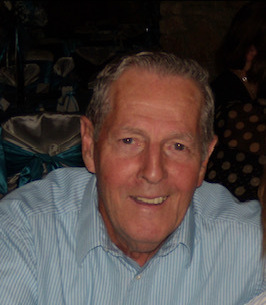 Phillip was the youngest son of Arthur Dee Grace and Lena Elizabeth Patterson Grace. He was delivered into this life by his grandmother Katherine "Katie" Riley Patterson on June 26th 1934, in the Hill County west of Austin Texas.

In his earlier years, he attended the small schoolhouse known as Eanes, where many to the hill county children (many being family or lifelong friends) went. Later attending Allen Junior High and Austin High school.

The Korean War had broken out and Phillip asked his Dad's approval (being under age to enlist) to drop out of school and join the U.S. Navy as both of his older brothers (Arthur Ross Grace and Daniel Harold Grace) were already enlisted.

Soon he was headed to Japan and served most of his naval career stationed out of Sasebo Japan on board the U.S.S. Diphda AKA 59. He was very proud of his service to our country and told many stories about his adventures in the U.S. Navy. The Diphda supplied ammunitions to many of the naval ships heading into Korean / China war zone areas. Phillip often said (in humor) his ship was a floating bomb, because of the large amounts of ammunition they carried.

After his tour of duty ended, he returned to civilian life and to his family home in the hill county west of Austin. He met and soon married his 1st wife Dortha May Clayton Grace. They were married on February 3rd of 1956 at his parents' home. They had 2 sons, Robbie Bruce Grace Sr. and Russell Dee Grace. Phillip and Dortha divorced in 1976.

Phillip met and married Dorothy "Dottie" Jean Singleton in late 1977. Both have children from previous marriages, they worked to blend the families into one. They enjoyed life and traveled often. Dottie passed away in 1989.

He then met Alvena Sylvia Klages Maddox and they were married in 1990. Again both already having children from previous marriages worked to blend the families together. Alvena and Phillip traveled throughout the United States, which allow Phillip to reach a milestone of having been to all 50 states in his lifetime. Alvena passed away in 2012.

His final partner was Lois Annette Anastasi. She and Phillip travel often as well with multiple trips to Alaska being high points as Phillip love the beauty of that state. She passed away in 2021. Phillip missed her greatly over the last year of his life.

He was very much an Entrepreneur. His early work life had him working in jobs in the service industry, which allow him to learn how to run a business. Soon he went into business for himself working with the City of Westlake Hills on a number of projects in the late 1960s into the 1970s. In the 1980s to 2010, he adventured into building lake cabins and working on land deals around the center Texas area. He enjoyed working on projects throughout his life. Even in retirement, you could find him doing rock work and landscaping.

Most people will tell you that he was a true Southern Gentleman. Something rarely found in today's world. That is how his family and friends will remember him. He passed away at his home near Bertram Texas on August 15h 2022 at the age of 88 years old. Leaving behind one son (Robbie Grace Sr.) and a number of step sons and daughters. He had 2 direct grandsons (Robbie Grace Jr. and Eric Dee Grace) and the recent addition a granddaughter (Tiffany Nguyen Grace) and 2 direct great grandkids (Robbie Grace III and Addison Grace), But a large family of grandchildren, great grandchildren, and great-great grandkids through his marriages.