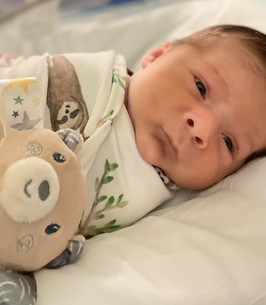 Lucas James Colmenero, of Austin, TX, passed away on July 26th, 2022, after a beautiful week of life.

Lucas entered the world on July 19th, 2022. He was born with critical congenital heart disease (HLHS) and showed tremendous courage and strength during his time at Dell Children's Medical Center.

He is survived by his parents, Jaime and Angela Colmenero, his doting big brother, Evan, and numerous extended family members.

From the moment Lucas entered our lives, all he knew was love. In his 7 days of life, he did nothing but spread joy and hope to all who knew him. A night owl from the beginning, he was known to show his bubbly personality late into the evenings. He made the cutest faces, and had all his nurses on their toes trying to keep him swaddled nice and tight. He put a smile on everyone's face, but no one more than his big brother Evan. They had a bond that only two brothers could share, and watching them interact brought his family such happiness.

He is preceded in death by his sibling, baby Colmenero, as well as his great-grandparents, aunts and uncles.

In lieu of flowers, the family asks that you consider donations in Lucas' memory to one of the following organizations: Ruston's Hope Chest, who donates swaddles to infants in the Cardiac Care Unit at Dell Children's, and The Texas Center for Pediatric and Congenital Heart Disease.

The family would like to thank the numerous team members at the Dell Children's CCU, from his nurses, doctors, child life, palliative care, and their psychosocial team for helping our family love on Lucas from beginning to end.

Serving as pallbearers will be his grandfathers, Orlando Colmenero and Rene Gaytan. Honorary pallbearers are his cousins; Grayson and Wyatt Moles, Brody and Barron Tate.

Visitation will be on Tuesday, August 2nd from 6-8pm at Harrell Funeral Home, 4435 Frontier Trail, Austin, TX. A rosary will be said at 7pm. His funeral Mass will be celebrated on Wednesday, August 3rd at 11:00 AM at Santa Cruz Catholic Church, 1100 Main Street, Buda. A private burial will follow the Mass. The family asks those joining us to please wear masks for safety, and colorful clothing is encouraged.